Three months since the last release, and three months since it is available as a separate standalone application running in the notification area. This has made it a lot easier to test and debug, as before I had to build the plugin, install the plugin, restart the panel or remove/readd the plugin in the panel, now I just have to run ./xfce4-notes from the source directory.

This new release has seen some structural tree changes to save time during compilation. Now everything is in src/ and lib/, where lib/ contains code to build an XnpHypertextView, an XnpNote (a composite-widget that embeds a GtkScrolledWindow with an XnpHypertextView and sends “save” signals on changes), an XnpWindow with the custom made navigation and title bars and the right click menu on the title bar, and finally an XnpApplication class that is the heart of everything, it handles creations/deletions of notes, loads/saves the data, etc. The src/ directory contains the main files for the panel plugin, the status icon, the popup command and the settings dialogue.

The new stuff is mostly eye-candy as stated in the previous blog entry. The GTK+ RC style has been pimped up with custom made scrollbars and the source code contains a self-drawn close button. The stuff about GTK+ scrollbars theming is grossly explained on live.gnome.org but I opened the GTK+ Dust theme files which was, to me, more understandable :-) Also it was because of this particular theme I took a look at customizing the scrollbars, see below the before/after screenshots. The older article about writing a Widget with Cairo helped me getting started from scratch with an empty “close button” widget to replace the simple GtkButton with label. As I liked very much the time passed on these changes I contributed a tutorial “Monochrome icon” available only in PDF as of today which I hope to be useful for Vala beginners but also a nice update of the article about Cairo but with Vala language. 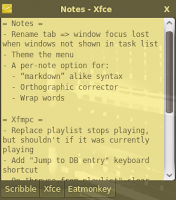 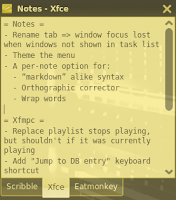 The fixes included in this release are the following: correctly restore sticky-window and keep-above states after some race conditions, and restore tab label orientation after renaming a note. And last but definitely not least the undo feature was not working because an internal timeout wasn't reset to zero which made the code think a snapshot was needed and thus the undo/redo buffers ended with the same content after the timeout elapsed. Thanks to Christian (the developer behind Midori) otherwise I would still not have taken a look around this!

The forthcoming features I have in mind would be a search dialogue and per-note options for activating a stripped down “markdown” syntax, an orthographic corrector and wrapping words which is the default for the moment.

The release is available at archive.xfce.org.

Thanks for the feedbacks and reports you sent and will send back.

Update: The tutorial is now also available on the Xfce wiki.
Posted by Mike Massonnet at 9:48 AM 16 comments:

I've been using a custom GTK+ RC style for the notes plugin since the version 1.4.0, right now it is at version 1.7.2. I have been playing with GTK+ theming again these last two hours, and I've get custom scrollbars, a gradient for the custom-made “title bar”, and better colours for the notebook to get the current tab stand out from the crowd.

While experimenting on a test-case code I found out a better way to parse a gtkrc file in the program. The first time I was fighting with the existing gtk_rc related functions, I gave up on a solution I partially dislike that is to include a line to the custom gtkrc file within ~/.gtkrc-2.0.

Today I understood how gtk_rc_parse(filename) behaves. You have to call this function at the beginning of the program before building any widgets, it will work even if the file doesn't exist yet. Next, while the program is running, you can modify the file, create it, delete it, truncate it, whatever, and call gtk_rc_reparse_all() to get the style refreshed in the GUI. It's hard to believe that such easy things are sometimes a PITA :-)

Be prepared for a 1.7.3 notes plugin with nicer colours.
Posted by Mike Massonnet at 4:46 PM 1 comment:

When using a status icon within the notification area it is common to use the left-click action to show/hide the main window. Obviously this is often done in different ways. So here is my tip on how to do it right :-)

What I believe to me the most sense-full way is to:
In C language it looks like this:
I have been doing this for quite a long time inside the Xfce Notes plugin, except a little different with multiple windows.

Some remarks, the PendingSealings proposes gtk_widget_get_visible instead of its analogous MACRO. And as you may also notice when the window is hidden it gets moved just after, this is important as otherwise the window would be repositioned by its initial value once shown again (e.g. centre of screen or dynamically by the window manager).
Posted by Mike Massonnet at 1:02 AM No comments: