I have been following a short discussion on the IRC channel #xfce regarding an issue with the use of Conky and transparency. I didn't use Conky for a very long time, but since I knew it was possible to have Conky perfectly running, I gave it a shot again and since I did a fresh reinitialization of Xfce on my workstation, I tweaked the configuration file to my need. Now I have it running in the background and I'll most probably keep it.

The configuration I was able to get for a good working Conky window with transparency is bellow. Of course I could tell you which combination doesn't work, with the why, but since there are so many of them I simply put a working one.

Here is a screenshot of the desktop with Conky in the bottom right corner, I made sure there is some I/O activity going on :-)

Now if you want you can steal my .conkyrc file.
Posted by Mike Massonnet at 6:22 PM 34 comments:

I've been hit by several phishing emails in a short time the last week. Having time this morning I took the initiative to look at the headers from one email and the phishing location.

The hosting server
The domains DNS zone is hosted on a particular network just like its website. Two different servers actually, but behind it seems to be a lucrative webhosting service where you can get your domain registered although it's not a registrar. All of this is hosted in Texas.

The email server
The email is originating from Italy. The FROM address is set up to show a truthful email (usually where you put the surname) with an inexistant email address behind that. The email address' domain name exists however and is hosted in France, but has no relation to the scam, at least the owner of this domain can't do anything about it.

The Return-Path shows a real email address with a different domain name but same network anyway. The domain name shows a dummy webpage "Under construction".

Who to contact?
All of them if you care, otherwise just let it go, because phishing pages are set up and down daily...

To contact the webhosting or email server, request the Whois information of the IP address and contact the abuse department, there is always an abuse section in the Whois of an IP address. You can also contact the domain name holder and/or look if the registrar or webhosting sevice has a dedicated abuse website page.

Of course it happens that an abuse email address forwards everything to the trash can. In order to have a chance to stop the scam, it is good to contact as many services as possible.
Posted by Mike Massonnet at 3:02 PM No comments: 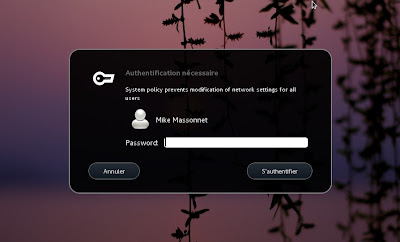 There are three main values you can pass to ResultActive that are no, auth_admin or yes. Respectively it will deny the authorization, ask for a password, and give access. For further information about the possible values check the polkit manpage, also don't miss the pklocalauthority manpage to read more about the localauthority tree structure.
Posted by Mike Massonnet at 8:11 AM 14 comments:

GeoIP is a proprietary technology provided by MaxMind that allows the geolocalization of IPs. It provides databases as both free and paid solutions with IP records matching the country and the city. The GeoLite Country database can be downloaded for free and is updated about once a month.

The database can be used with the command line tool geoiplookup . By calling it, it will check for the default database, but you can specify another one through a command line option.

First download and install the latest database and license under your home directory, for example ~/.local/share/GeoIP/. Make sure to decompress the database with gunzip. The directory has to contain these files:
Next create an alias for the command geoiplookup, for example through your ~/.bashrc script put the following line:

And done! But why all the hassle? Because your system may not provide the updates on a regular basis. Of course you can set up a scheduled task to download the database right into your home directory.
Posted by Mike Massonnet at 10:20 AM 1 comment: